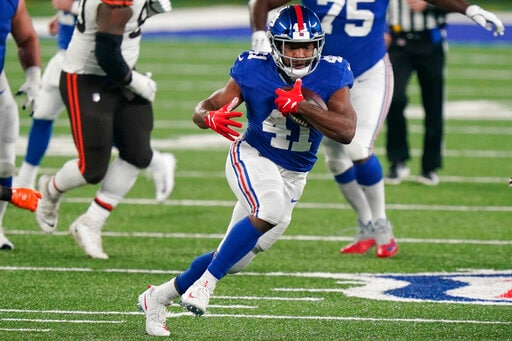 EAST RUTHERFORD, N.J.: The New York Giants have added depth to the running game in case star Saquon Barkley isn’t ready for the start of the regular season coming off a major knee injury.

The Giants on Monday announced the re-signing of Alfred Morris. The 10-year veteran played nine games for coach Joe Judge last season and finished second on the team in rushing with 238 yards.

I’ve been waiting for someone to let me get my foot back in the door, Morris said Monday after watching practice.

That’s what happened last year to the well-traveled veteran. He had a career-low one carry in 2019 and wasn’t invited to a training camp in 2020. So he worked out at his home in Pensacola, Florida, and waited.

The Giants called in late September after Barkley was placed on injured reserve with a torn right ACL. The call wasn’t for a spot on the roster. He spent a month on the practice squad getting ready. He was activated to the game roster three times, the last in mid-November, and never left after that.

The product of an emerging Florida Atlantic program, Morris had 55 carries as a backup for Wayne Gallman. He also caught three passes for 19 yards and scored twice, once running and the other receiving.

You got to be ready before the opportunity comes, the kinesiology major said. You cant get ready once it does. And thats something that I practice, and I preach.

Judge said adding Morris allows the team to practice the way it wants with Barkley not participating at this point. He joins a backfield that includes Corey Clement, Davontae Booker, Eli Penny and rookie Gary Brightwell. Gallman signed as a free agent with San Francisco.

Morris brings more to the room than playing ability.

Its just refreshing seeing his face, Judge said. Hes always smiling and good, great energy out there. Again, like anyone else, he has an opportunity to come in here and compete for a spot on this team.

Judge has refused to set a date for Barkley’s return. He continues to say the fourth-year running back is making progress.

Morris, who has played for Washington, Dallas, San Francisco and Arizona, said he would not have signed if he felt he could not compete, adding he doesn’t just want a check. Football is still fun, he says.

NOTES: The Giants are celebrating the 10th anniversary of their Super Bowl title after the 2011 season. Defensive linemen Osi Umenyiora, Justin Tuck and Mathias Kiwanuka all members of that team were at training camp Monday. So was German defensive lineman Markus Kuhn, who was drafted after the Super Bowl win. … G Jonotthan Harrison was taken off the reserve/physically unable to perform list. … Judge had his entire defense run a penalty lap. Center Joe Looney, a 10-year veteran recently signed, had to run two. The former Cowboy said it’s the first time he has run laps in about 20 years. … LB Blake Martinez will remain on the COVID-19 list. He is back with the team but will not be taken off the list until he is ready to get back on the field.